“No one who had ever seen Catherine Morland in her infancy would have supposed her born to be an heroine.”
Jane Austen, Northanger Abbey 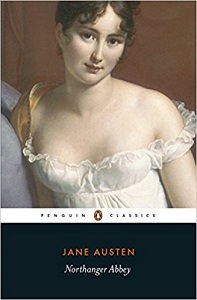 Of the innumerable critical works devoted to Jane Austen, perhaps the most widely-read and beloved author in all of literature, surprisingly little attention has been paid to her interest in Gothic fiction. Austen was in fact steeped in the popular genre fiction of her time, and nowhere is this more evident than in her first novel, Northanger Abbey. Frequently described as a “satire” of Gothic fiction, Northanger Abbey utilizes an array of Gothic devices and plot twists to wonderful comic effect.

Austen’s wry introduction to the novel’s protagonist, Catherine Morland, delightfully subverts the Gothic tropes associated with the life of an heroine. Whereas the typical Gothic heroine is preternaturally gifted and beset with peril, Catherine Morland “had neither a bad heart nor a bad temper, was seldom stubborn, scarcely ever quarrelsome, and very kind to the little ones, with few interruptions of tyranny; she was moreover noisy and wild, hated confinement and cleanliness, and loved nothing so well in the world as rolling down the green slope at the back of the house.” Austen goes out of her way to emphasize Catherine’s ordinariness; even allowing that young Catherine was “often inattentive, and occasionally stupid.” She is an almost painfully ingenuous character, and yet her earnestness is entirely charming.

Catherine’s reading habits, coupled with her highly imaginative nature, are essential to the plot of Northanger Abbey. Within the first pages we are informed of the tenuous value Catherine places on books: “provided that nothing like useful knowledge could be gained from them, provided they were all story and no reflection, she had never any objection to books at all. But from fifteen to seventeen she was in training for a heroine; she read all such works as heroines must read to supply their memories with those quotations which are so serviceable and so soothing in the vicissitudes of their eventful lives.” Catherine’s attraction to literature of this mode finds its apotheosis in Ann Radcliffe's Gothic novel The Mysteries of Udolpho (1794).

In the 2017 biography Jane Austen, the Secret Radical, author Helena Kelly notes that "Ann Radcliffe's Gothic novel The Mysteries of Udolpho was so popular, and so widely-read during the 1790s, that Jane would have expected her audience to recognise even quite detailed references to it." Kelly further suggests that allusions to Radcliffe’s work are not limited to Northanger Abbey; for instance, the character John Willoughby in Sense and Sensibility possesses many of the same characteristics as Valencourt, the love-interest in Udolpho.

As in other Austen novels, there is little doubt that the heroine will ultimately find happiness and fulfillment with her chosen suitor; in this case, the admittedly adorable Henry Tilney. (Catherine believes herself to be less sophisticated than Tilney, to whom she makes a statement of such endearing self-effacement that it may be my favorite bit of dialogue in all of Austen’s work: “Me? Yes; I cannot speak well enough to be unintelligible.”) The ensuing plot complications that postpone their union are largely the result of Catherine’s insistence that her life conform with the Gothic fiction she so reveres. Northanger Abbey takes its title from the residence of the Tilney family, where Catherine visits for several weeks, and where she continually attempts to uncover nonexistent mysteries. She searches antique furniture for hidden documents and follows “secret” passages to rather embarrassing conclusions, in the belief that surely her own life must, at some point, become a Gothic adventure.

Austen has great fun exploiting well-known Gothic conventions, but there is nothing pejorative about her representation of Gothic fiction. Seemingly every major character in the novel has read works in this tradition: from Catherine’s sometime friend, Isabella, to her vain and manipulative admirer, John Thorpe, to her future husband, Henry Tilney. There is a very satisfying scene wherein Catherine’s insufferable would-be suitor, Thorpe, expresses derision for her reading habits, particularly her most beloved novel: “Udolpho! Oh, Lord! Not I; I never read novels...Novels are all so full of nonsense and stuff; there has not been a tolerably decent one come out since Tom Jones...No, if I read any, it shall be Mrs. Radcliffe’s; her novels are amusing enough; they are worth reading; some fun and nature in them.” Catherine then, rather hesitatingly, points out that Mrs. Ann Radcliffe is in fact the author of The Mysteries of Udolpho. Thorpe responds with predictable boorishness.

Allusions to Gothic fiction in Northanger Abbey are not limited to the works of Ann Radcliffe. In an especially memorable scene, Catherine is recommended seven other novels “of the same kind.” As a true Gothic enthusiast, Catherine responds: “But are they all horrid, are you sure they are all horrid?” This Gothic reading list includes Eliza Parsons’ The Castle of Wolfenbach and The Mysterious Warning, Regina Maria Roche’s Clermont, Ludwig Flammenberg’s Necromancer; or, The Tale of the Black Forest, Francis Lathom’s The Midnight Bell, Eleanor Sleath’s The Orphan of the Rhine, and Marquis de Grosse’s aptly titled Horrid Mysteries. Following the revival of Jane Austen’s work in the early twentieth century, all of the aforementioned “horrid” books were republished and critically reappraised. Their quality varies considerably, and all of them fall short of Ann Radcliffe’s work, but they reveal something of Austen’s own reading habits and personal affection for Gothic fiction.

For devoted fans of Jane Austen, I highly recommend reading Radcliffe’s The Mysteries of Udolpho and then rereading Northanger Abbey. Admittedly, this is a bit of a commitment. Udolpho is nearly 700 pages in most editions, and it includes several lengthy passages of poetry--penned by the novel’s protagonists--which are a bit of a distraction from the narrative. But Udolpho will unquestionably enrich your appreciation for Austen’s first novel, and it is a rewarding book in its own right. As Austen biographer Helena Kelly summarizes, Udolpho is “full of mysteries, and of threats--unwanted suitors, brigands, the unspeakable horror that lurks behind a picture covered with 'black veil.'”