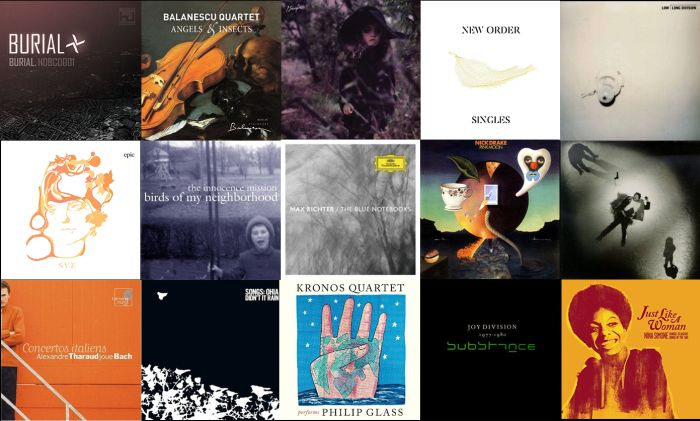 ‘My Essential Music’ is a new feature on the FRVPLD blog, continuing our prior exploration of staff favorites, 'My Essential Books.' We'll talk up our favorite music in the hope that you may give these artists a chance, or at least appreciate our passion for the music that has made us who we are.

In his recent memoir, Words Without Music, Philip Glass writes, "'If you're not a minimalist, what are you?' many have asked me over the course of my career. 'I'm a theater composer,' I reply." This may seem like a surprising self-assessment, given that Glass is frequently cited as the paradigmatic minimalist composer of the second half of the twentieth century. The self-awareness of the statement is especially interesting in context, as he's specifically discussing his much-praised and instantly recognizable string quartets. String Quartet No. 3 was originally composed for Paul Schrader’s 1985 film Mishima: A Life in Four Chapters, and has subsequently turned up in various film and television productions over the years. This deceptively simple string arrangement, performed by Glass' long-time collaborators Kronos Quartet, is endlessly engaging. You can hear the definitive recording on the exemplary album, Kronos Quartet Performs Philip Glass.

Burial is the nom de guerre of London-based musician William Emmanuel Bevan. The preceding sentence comprises the entirety of the available biographical information on this artist. Unlike the masked villain MF DOOM or the helmeted robots in Daft Punk, who have crafted mysterious personae for aesthetic purposes, Burial eschews public performance altogether, preferring to let his recorded music speak for itself. The late Mark Fisher included an insightful assessment of Burial’s relative anonymity in his book Ghosts of My Life: Writings on Depression, Hauntology and Lost Futures: “Burial's refusal to 'be a face,' to constitute himself as a subject of the media's promotional machine, is in part a temperamental preference, and in part a resistance to the conditions of ubiquitous visibility and hyper-clarity imposed by digital culture." This track, from Burial's self-titled debut album, is simultaneously one of his warmest and most haunting productions, and it is emblematic of Fisher’s assessment of the artist: "Burial established himself as an extraordinary sonic mythographer, a sound poet capable of articulating the existential malaise of an era and a place using only sampled voices, broken breakbeats and musique concrète sound effects.” Whether Burial's work is new to you or not, I would encourage you to check out this YouTube video that creatively juxtaposes "Forgive" with old footage of an unusual bird migration.

“Heavy Water/I’d Rather Be Sleeping” – Grouper

Grouper is the name used by musician Liz Harris, who has created a wholly unique soundscape built around hushed vocals, augmented acoustic guitar, and ambient noise. (If you're fond enough of the band Jesus & Mary Chain to have sought out their early acoustic demos, you’ll have some sense of the way Harris' songs work. Listen to the acoustic demo of “Taste of Cindy” for a superior example.) Perhaps the most engaging aspect of Grouper’s work is the fact that she sounds like she’s singing to herself, bringing an intimacy to her songs that can almost feel voyeuristic. This particular track, from the album Dragging a Dead Deer Up a Hill, is one that I've often played on a loop, finding new layers of complexity with each listen, attempting to decipher lyrics that occasionally slip into inaudibility: “I'd rather be sleeping, I'd rather fall into tidal waves, right where the deepest currents fall.”

“Ceremony” marks the transition from Joy Division to New Order. The band's collected Singles are an embarrassment of riches, containing outstanding tracks like "Blue Monday," "The Perfect Kiss," and "Bizarre Love Triangle," but "Ceremony" remains the most invigorating example of what makes this band extraordinary.

Balanescu Quartet are best known for their collaborations with other musicians (David Byrne, Pet Shop Boys, Spiritualized, etc.), but this original composition by Alexander Bălănescu has long been a favorite of mine. I don't exactly know why this relatively unassuming waltz has become such an important piece for me, though it's undeniably lovely.

To be perfectly honest, I could have chosen half a dozen Sharon Van Etten songs to fill this slot: “Tarifa,” “Love More,” “Tornado,” “Afraid of Nothing.” Her music has a tendency to inspire intense identification amongst listeners, who hear something of themselves in the vulnerability of her songwriting and the intimacy of her voice. If you think that’s just my own bias, check out this video of a New Zealand newscaster who was completely undone by an impromptu communication with the singer. What was undoubtedly intended to be a cute surprise for the popular news anchor resulted in heartwarming befuddlement, as his nervous laughter turns to tears, and he tries to tell Van Etten how much he loves her music but can’t quite figure out whether or not she can hear him over the monitor, and he attempts to regain some level decorum while continuing to cry on camera, finally making the tear-jerking pronouncement: “Music sometimes just keeps you afloat, doesn’t it?” If I’m limiting myself to a single Sharon Van Etten song for the purposes of this list, I have to choose the penultimate track on her 2010 album Epic. “One Day” is propelled by comparatively upbeat guitar, and imagistic lyrics that detail the passage of time in relation to a loved one: “Snow is outside but I'm by your fire […] Summer in mind and spring by your side.” The song culminates with the bittersweet ambivalence that is a hallmark of Van Etten’s poetic idiom: “Distance is fine, I know you can care, and nothing is big like that. You don’t see me now, I don’t see you back.” But the repeated chorus belies her indifference, as she consoles herself: “One day I’ll be fine with that.”

The unique vocal harmony of Alan Sparhawk and Mimi Parker has been the through-line of every Low recording, from their 1994 debut, I Could Live in Hope, to their most recent release, Ones and Sixes. "Throw Out the Line," from the band's 1995 album Long Division, epitomizes their "slowcore" aesthetic through deliberate pacing and effortless harmony.

“On the Nature of Daylight” is the centerpiece of Max Richter’s acclaimed 2004 album The Blue Notebooks. It is a composition of such austere, insistent beauty that I can't really attempt anything like an objective description. As Richter himself explains in this comprehensive track-by-track album breakdown, the composition takes its title from the first-century BC poem "On the Nature of Things" by the Roman philosopher Lucretius. Richter had in mind these lines from that work: “There is not anything which returns to nothing, but all things return dissolved into their elements." Once you've experience Richter's original recording, check out this inspired mashup with jazz vocalist Dinah Washington, titled “This Bitter Earth/On the Nature of Daylight.”

One of the standout tracks on Nick Drake's legendary album Pink Moon, "Place To Be" features lyrical imagery reminiscent of the Dylan Thomas poem “Fern Hill” (always a favorite of mine), and serves as a representative song by an artist whose work feels ever more prescient and insightful.

“Lakes of Canada”– The Innocence Mission

I couldn't even guess how many times I've listened to the album Birds of My Neighborhood, which is inarguably The Innocence Mission's definitive work. There's something profound and resonant in singer-songwriter Karen Peris' lyrics, which generally center on tender childhood memories and shy hints at happiness. "Lakes of Canada" is the standout track in this regard, obliquely recounting a summer trip that the singer found inspiring. The concluding refrain breaks my heart every time: "Look for me another time, give me another day, I feel that I can change."

Originally a concerto for oboe by 18th-century composer Alessandro Marcello, this piece was given new life when Johann Sebastian Bach's solo keyboard arrangement was rediscovered and published in the 19th-century. Given this derivation, I’m not going to argue that this is an especially representative work for J.S. Bach, or that it deserves mention alongside masterworks like the Brandenburg Concertos or the Goldberg Variations. It’s a relatively small and contained composition, and that may be part of its appeal for me. I’ve listened to it so frequently that I’m no longer certain that it isn’t just the natural tempo of my mind. Alexandre Tharaud's 2005 recording, J.S. Bach: Concertos Italiens, is the definitive one for me.

The album Didn't It Rain is arguably the apex of Jason Molina's Songs: Ohia project; his highly poetic lyricism and expressive voice achieving a certain purity. The heart of the record is the nearly-seven-minute-long closer, "Blue Chicago Moon." As Erin Osmon notes in her biography of the musician, Jason Molina: Riding with the Ghost, "Blue Chicago Moon” contains “an early, unmistakable confession of Molina's emotional state, a sort of foreshadowing of depression's fog that would eventually envelope the singer..." Molina expresses this deeply personal emotional state by expanding upon the image of birds struggling to stay aloft during a storm: "Singing birds in sickness, sing the same blues songs. When they fell out of the emptiness, they must have brought along space’s loneliness." The song culminates in an urgent plea for the listener to persevere: "You are not helpless. Try to beat it. And live through space’s loneliness. You are not helpless. I’ll help you to try to beat it."

Slint’s music, particularly on their masterpiece Spiderland, seems dictated by the illogic of nightmares. The repeated riff on the instrumental track “Glenn” has all the menace of a werewolf stalking through a forest. I was immediately reminded of “Glenn” when I read this oddly hallucinatory sentence in Franz Kafka’s Letters to Milena: "I had the nightmare (of feeling at home in a place one doesn't belong), but for me this nightmare was real. I had to return to the darkness, I couldn't stand the sun, I was desperate, truly like an animal gone astray..."

The two closing tracks (following the original LP track sequence) on the Joy Division collection Substance are among the band's most iconic. "Love Will Tear Us Apart" is almost certainly the song freighted with the most Joy Division mythology, but I think "Atmosphere" serves as a more fitting epitaph. Its fragmentary lyrics are about connection, rather than the inevitable separation and loss of "Love Will Tear Us Apart." The range of Curtis' voice is admittedly limited, but his self-possessed charisma was truly irreplaceable, and there's real catharsis in the singer's reference to a "mask of self-hate" and "life rebuilding." The sense of freedom and release evident in "Atmosphere" is enhanced by Martin Hannett's production, which achieved similar heights on the album Closer.

“Who Knows Where the Time Goes” – Nina Simone

Written by Sandy Denny and famously recorded by her band Fairport Convention on the album Unhalfbricking, “Who Knows Where the Time Goes” has been covered by a host of singers since the late ‘60s. But, as is always the way, Nina Simone makes everything she sings her own. Recorded live in 1969 at the Philharmonic Hall in New York City, and subsequently released on the live album Black Gold, this performance is so subdued that you can actually hear the occasional cough from the hushed audience. Simone invokes the titular question with haunting deliberateness, and when she reaches the song’s apex, declaring “I have no fear of time,” the conviction in Simone’s voice is unequivocal.