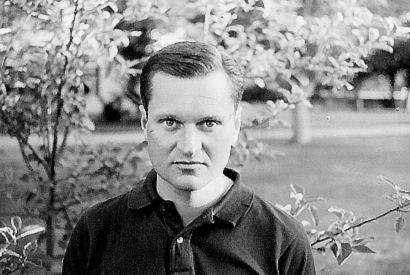 John Ashbery, arguably the dominant voice in American poetry for the last half-century, passed away on September 3, 2017. He was 90 years old. News of his passing brought to mind these closing words from his 1977 poem “Blue Sonata”:

In coming to give, to give up what we had,
We have, we understand, gained or been gained
By what was passing through, bright with the sheen
Of things recently forgotten and revived.
Each image fits into place, with the calm
Of not having too many, of having just enough.
We live in the sigh of our present.

A Harvard graduate, whose classmates included Kenneth Koch, Frank O'Hara and Edward Gorey, Ashbery began his career as an art critic, rubbing shoulders with Andy Warhol and his fellow Factory denizens. His book Self-Portrait in a Convex Mirror (available in Collected poems 1956-1987) brought him to national prominence, garnering the Pulitzer Prize, the National Book Award, and the National Book Critics Circle Award. Ashbery’s subsequent works cemented his reputation as an innovator of unparalleled poetic felicity. From the 1980s onward, he continued to regularly publish collections of his poetry (notably Houseboat Days and the book-length poem Flow Chart ) whilst also holding an esteemed position in academia, where his poetry was avidly studied by critics across a wide range of disciplines. Harold Bloom, Harvard literature professor and outspoken cultural critic, had this to say about the voluminous critical writing devoted to his friend John Ashbery in a 2013 interview: “Whole libraries have been written about John by now. I find it just silly. It’s all devoted to this notion that he’s a French poet writing in English. Or that he’s a Language Poet. It’s all nonsense.” Bloom’s characteristically high-handed dismissal points to the futility of categorization with respect to Ashbery’s work. His vast vocabulary and idiosyncratic articulation would seem to mark him as decidedly avant-garde, and yet his work is surprisingly accessible, even playful. It is often argued that poetry is losing its readership amongst non-academics, but John Ashbery stands as an exemplar of the poet whose work is artistically engaging and widely read; revered by fellow writers, literary critics, and the discerning reader with a library card.

Still, the poetry does sometimes occur
If only in creases in forgotten letters
Packed away in trunks in the attic--things you forgot you had
And what would it matter anyway,
That recompense so precisely dosed
As to seem the falling true of a perverse judgment.
You forgot how there could be a gasp of a new air
Hidden in that jumble. And of course your forgetting
Is a sign of just how much it matters to you:
'It must have been important.'