Can't get enough manga? If you enjoy browsing the teen area to find new manga series, be sure to also check out the titles we have available in ebook format. The following series are available on Axis 360. Search for these titles on the Axis 360 app, or follow the links directly to check out and read the books on your device. I think you will find some new series and authors to check out here!

Bizenghast by M. Alice LeGrow
Meet Dinah, a disturbed young girl who has been sent to the small town of Bizenghast to live with her aunt following the tragic death of her parents. Dinah thinks her aunt's house is haunted, but her aunt thinks she has some sort of mental illness. Dinah sneaks out with her only friend, Vincent, and together they discover a lost graveyard where Dinah reads from a stone engraving. This act binds her to a contract requiring Dinah to release spirits stuck somewhere between life and the afterlife. So Dinah begins her quest of "cleaning" the vaults, crypts and graves of lost souls, while struggling with the haunts at home and suspicions of her growing mental illness.

The Daily Lives of High School Boys by Yasunobu Yamauchi
In this slice-of-life comedy, high schoolers Tadakuni, Yoshitake, and Hidenori tackle the wacky and awkward situations they’re thrown into in their everyday lives! The trio do everything a normal group of high school boys would do. They play games, they tell ghost stories, and they even...wear skirts?! There’s no shortage of witty one-liners in this knee-slapping series!

Fence by C.S. Pacat
Nicholas Cox is determined to prove himself in the world of competitive fencing, and earn his place alongside fencing legends like the dad he never knew, but things get more complicated when he’s up against his golden-boy half-brother, as well as the sullen fencing prodigy, Seiji Katayama.

Futaribeya by Yukiko
This four-panel-style comic follows the everyday life of two high school roommates as they go to class together, tackle the mundane necessities of laundry and grocery shopping for two, and learn more about one another in a cute and heartwarming series of short stories.

Hi-Score Girl by Rensuke Oshikiri
The year is 1991, and the world is on the cusp of the golden age of 2-D fighting games. And on the outskirts of town, in a shady arcade that's a second home to delinquents and businessmen, one girl descends with dignity into her seat at the game cabinet... Her name is Akira Oono, and she's about to humiliate hardcore gamer Haruo Yaguchi, who fancies himself something of an arcade king, at Street Fighter! Will Haruo ever live down losing to a girl from his class?!

Laughing Under the Clouds by Karakarakemuri
Under the curse of Orochi, the great demon serpent reborn every 300 years, Japan has been shrouded in clouds for as long as anyone can remember. The era of the samurai is at an end, and carrying swords has been outlawed. To combat the rising crime rates, an inescapable prison was built in the middle of Lake Biwa. When brothers Tenka, Soramaru and Chutaro Kumo are hired to capture and transport offenders to their final lodgings in this prison, they unexpectedly find themselves faced with a greater destiny than any of them could have imagined. 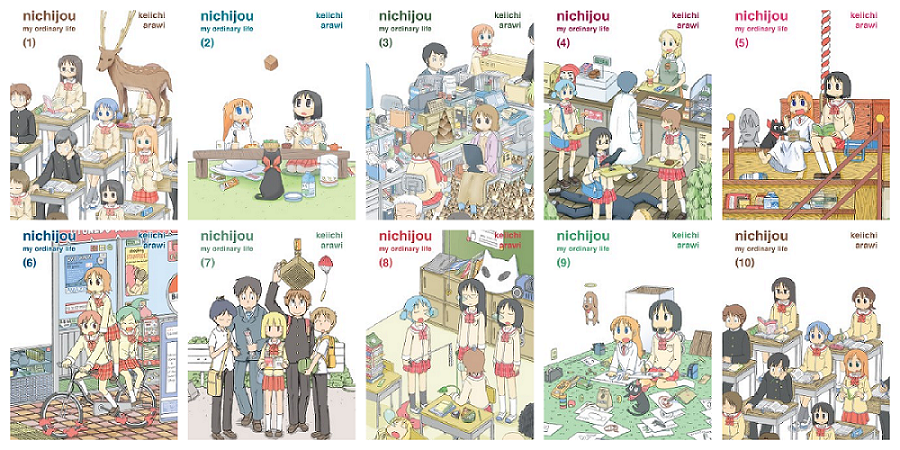 Nichijou by Keiichi Arawi
In this just-surreal enough take on the "school genre" of manga, a group of friends grapple with all sorts of unexpected situations in their daily lives as high schoolers. The gags, jokes, puns, and haiku keep this series off-kilter even as the cast grow and change. Check it out and meet the new ordinary. 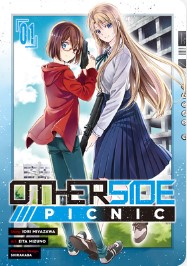 Otherside Picnic vol. 1 by Iori Miyazawa
In this sci-fi/fantasy survival thriller, the dangerous and deadly realm of the Otherside--where urban legends, cryptids, and folkloric legends roam--calls to two women, both in search of something. As they set out to sate their curiosity and explore this other world, will the most earth-shattering thing they discover on the Otherside be their feelings for each other?While on the trail of alleged paranormal activity, amateur urban explorer, depressed college student, and all-around loner Sorawo discovers a door to a curious destination--the Otherside. There, she has a near-miss with a creature both repulsive and mesmerizing...but before she can fall prey to the strange beast, the beautiful Toriko comes to her rescue! What horrors await the pair as they continue to explore this parallel world and its bizarre and dangerous denizens?! 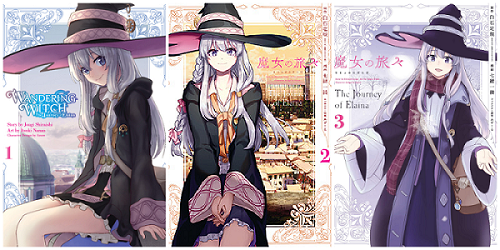 Wandering Witch: The Journey of Elaina by Jougi Shiraishi
Ever since she was a little girl reading books of magic and adventure, Elaina has dreamed of following in the footsteps of her childhood idol, the witch Nique, and living a life of travel. Now a full-fledged witch herself, Elaina sets off on a journey without a destination, wandering far and wide to see the world. With each new place she sees and person she meets, Elaina's world grows a little bit richer.