Here is a selection of non-fiction books for teens that are new to the shelves:

Mindfulness for Teens in 10 Minutes a Day: Exercises to Feel Calm, Stay Focused & Be Your Best Self by Jennie Marie Battistin
Start feeling better with mindfulness, the practice of being fully present and cultivating calm, one moment at a time. Simple and effective exercises -- that fit perfectly into your daily routine -- make it easy to keep yourself in the here and now, tackle challenges one at a time, and make the most of every minute.

Goodnight Mind for Teens: Skills to Help You Quiet Noisy Thoughts & Get the Sleep You Need by Colleen Carney
Millions of teens struggle with sleep and feel exhausted as a result. Goodnight Mind for Teens will help teens cope with the anxious and over-stimulating thoughts that can lead to insomnia, identify and work with their own circadian rhythm, and set up a new sleep schedule so they can improve their alertness, feel more energetic, and be in a better mood throughout the day.

Positively Teen: A Practical Guide to a More Positive, More Confident You by Nicola Morgan
Teaches teenagers how to approach their adolescent years with optimism and understanding, giving them the skills they need to develop long-term well-being.

Heads Up: Changing Minds on Mental Health by Melanie Siebert
A guide to understanding mental health and coping with mental illness, trauma and recovery. It features real-life stories of resilient teens and highlights innovative approaches to mental-health challenges.

Creative Coping Skills for Teens and Tweens: Activities for Self Care and Emotional Support Including Art, Yoga and Mindfulness by Bonnie Thomas
Offers dozens of suggestions, interventions, and activities for ways that tweens and teens can care for their physical and mental health, including managing life's stressors, how to recognize 'red flags' in a relationship, and listening to their body's intuition more often.

Call Me American: The Extraordinary True Story of a Young Somali Immigrant by Abdi Nor Iftin
Abdi Nor Iftin grew up amidst a blend of cultures, far from the United States. At home in Somalia, his mother entertained him with vivid folktales and bold stories detailing her rural, nomadic upbrinding. As he grew older, he spent his days following his father, a basketball player, through the bustling street of the capital city of Mogadishu. But when the threat of civil war reached Abdi's doorstep, his family was forced to flee to safety. Through the turbulent years of war, young Abdi found solace in popular American music and films. Nicknamed Abdi the American, he developed a proficiency for English that connected him--and his story--with news outlets and radio shows, and eventually gave him a shot at winning the annual U.S. visa lottery.

What the Eagle Sees: Indigenous Stories of Rebellion and Renewal by Eldon Yellowhorn and Kathy Lowinger
Indigenous people across Turtle Island have been faced with disease, war, broken promises, and forced assimilation. Despite crushing losses and insurmountable challenges, they formed new nations from the remnants of old ones, they adopted new ideas and built on them, they fought back, they kept their cultures alive, and they survived. Key events in Indigenous history with accounts of the people, places, and events that have mattered from the 12th century to present day are told from a vastly under-represented perspective--an Indigenous viewpoint.

Amazons, Abolitionists, and Activists: A Graphic History of Women’s Fight for Their Rights by Mikki Kendall and A. D'Amico
Graphic novel-style primer that covers the key figures and events that have advanced women's rights from antiquity to the modern era. Illuminates the stories of notable women throughout history--from queens and freedom fighters to warriors and spies--and the progressive movements led by women that have shaped history, including abolition, suffrage, labor, civil rights, LGBTQ liberation, reproductive rights, and more.

Atomic Women: The Untold Stories of the Scientists Who Helped Create the Nuclear Bomb by Roseanne Montillo
Meet the World War II female scientists who worked in the secret sites of the Manhattan Project. Recruited not only from labs and universities from across the United States but also from countries abroad, these scientists helped in -- and often initiated -- the development of the atomic bomb, taking starring roles in the Manhattan Project. In fact, their involvement was critical to its success, though many of them were not fully aware of the consequences.

Apollo 13: A Successful Failure by Laura Bufano Edge
The Apollo 13 mission in 1970 was the seventh manned mission in the Apollo space program and the third that was meant to land on the Moon. The landing was aborted after an oxygen tank exploded, threatening all lives onboard the craft. The crew returned home safely. This book explores how the team worked together and what the space program learned from the experience.

A History of Plants in Fifty Fossils by Paul Kenrick
An illustrated history of plants presented through the stories of 50 key fossil discoveries.

The Wide World of Coding: The People and Careers Behind the Programs by Jennifer Connor-Smith
An overview for young adult readers of coding, including discussion of various software programs, the types of problem solving that coding tackles, careers in the field, and activities.

Girls Garage: How to Use Any Tool, Tackle Any Project, and Build the World You Want to See by Emily Pilloton
This reference book is so comprehensive it's the only book you'll ever need to own to figure out how to build or fix anything. It features tool types, usage, projects, quick fixes, and other "how to" information, plus profiles of inspiring builder girls and women. 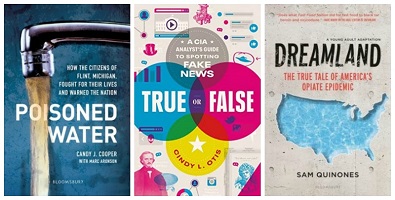 Poisoned Water: How the Citizens of Flint, Michigan, Fought for Their Lives and Warned the Nation by Candy J. Cooper with Marc Aronson
Based on original reporting by a Pulitzer Prize finalist and an industry veteran, the first book for young adults about the Flint water crisis. Poisoned Water shows not just how the crisis unfolded in 2014, but also the history of racism and segregation that led up to it, the beliefs and attitudes that fueled it, and how the people of Flint fought--and are still fighting--for clean water and healthy lives.

True or False: A CIA Analyst's Guide to Spotting Fake News by Cindy L. Otis
A YA Nonfiction book about the history of Fake News and tips for how to spot it.

Dreamland: The True Tale of America's Opiate Epidemic by Sam Quinones (YA Edition)
In 1929, in the blue-collar city of Portsmouth, Ohio, a company built a swimming pool the size of a football field; named Dreamland, it became the vital center of the community. Now, addiction has devastated Portsmouth, as it has hundreds of small rural towns and suburbs across America. How that happened is the riveting story of Dreamland. Quinones explains how the rise of the prescription drug OxyContin, a miraculous and extremely addictive painkiller pushed by pharmaceutical companies, paralleled the massive influx of black tar heroin--cheap, potent, and originating from one small county on Mexico's west coast, independent of any drug cartel.