“By the pricking of my thumbs,
Something wicked this way comes.
Open, locks,
Whoever knocks!”
-- William Shakespeare, Macbeth, Act 4, Scene 1 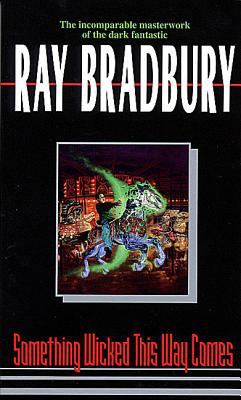 The title of Ray Bradbury’s 1962 novel Something Wicked This Way Comes is perfectly apt; evoking the witchery of Shakespeare’s blood-soaked tragedy, and heralding something ominous. The setting for this dark narrative is Green Town; Bradbury’s nostalgically realized fictionalization of his hometown, Waukegan, Illinois. Two thirteen-year-old boys, Will Holloway and Jim Nightshade, neighbors and best friends, are enthusiastically looking forward to Halloween, when they encounter a lightning rod salesman who warns them of storms on the horizon, trouble coming their way. This sinister force arrives in the unexpected guise of a carnival, Cooger & Dark's Pandemonium Shadow Show; a perennial evil that has marred the history of Green Town for centuries.

The two boys are aided by the unlikely heroism of  Will’s father, Charles, “the janitor, the library man, the stranger.” While there’s nothing remarkable about literary fathers coming to the aid of imperiled young adults, Charles Holloway would seem demonstrably ill-suited to this role. He is, at the time of our introduction to him, so distant a presence in his son’s life that Will frequently needs to remind himself to call him Dad. Bradbury details their estrangement with tenderness and restraint: “And suddenly Will remembered nights rising at two in the morning to go to the bathroom and spying across town to see that one single light in the high library window and know Dad had lingered on late murmuring and reading alone under these green jungle lamps. It made Will sad and funny to see that light, to know the old man--he stopped to change the word--his father, was here in all this shadow.”

If the details of this story seem familiar--the small town setting, young protagonists battling ancient evil, estranged parents joining forces with the younger generation--that’s no fault of the author, but rather a testament to the endurance of his achievement. Something Wicked This Way Comes was an acknowledged influence on Stephen King (his novel It owes a particularly heavy debt to Something Wicked), Neil Gaiman, R.L. Stine, and many others. Even the popular Netflix series Stranger Things is evocative of themes explored in Bradbury’s Green Town novels.

Something Wicked This Way Comes is a work that may have markedly different meanings, determined by the age at which you experience it. On rereading the novel as an adult, I was surprised at the centrality of Will’s father to the narrative; realizing that the arc of the novel belongs as much to Charles Holloway as it does to the two young protagonists. It is very much the story of Charles’ struggle to accept his parental responsibilities, despite his fear that he’s “too old” to be of use to his son. Our initial impression of him (“a man happier at night alone in the deep marble vaults, whispering his broom in the draughty corridors”) evolves with each brave step forward. Charles not only rises in his own estimation, but in his son’s: “Oh my gosh, why didn't I see it before? Dad's tall. Dad's very tall indeed.”