Recommendations for fans of "Miss Peregrine's Home for Peculiar Children"

Miss Peregrine’s Home for Peculiar Children by Ransom Riggs is the first book in a series that mixes supernatural and fantasy elements with time travel, historical fiction, and mystery. At its heart Miss Peregrine is about a boy named Jacob trying to learn about his grandpa’s past; he travels to Wales in search of the orphanage his grandpa was sent to during World War II, and learns about a hidden world and family secrets. Spooky vintage photographs throughout the book enhance the story. 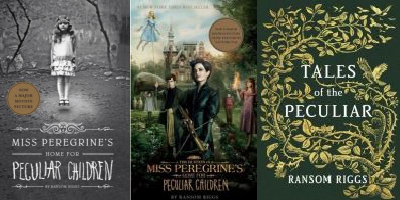 Coming soon for Miss Peregrine fans:
Tales of the Peculiar, a collection of fairy tales
The movie adaptation of Miss Peregrine’s Home for Peculiar Children is out in theaters September 30.

Here are some suggestions if you’ve read everything in the series (including the graphic novels):

If you enjoyed the adventure elements and creepy secrets of Miss Peregrine, try:

This Dark Endeavor by Kenneth Oppel: In this gothic thriller, teenage Victor Frankenstein hopes that the secrets of alchemy can help him and his friends create the Elixir of Life to cure his twin brother Konrad of his illness. Sequel: Such Wicked Intent.

If you loved getting freaked out by the photographs in Miss Peregrine and want a book that is more horror than fantasy, try:

Asylum by Madeline Roux (1st in a series): Students attending a summer college prep program are housed in an old building that was previously an asylum. They discover photos and patient files and Dan has eerie visions and dreams that seem to be from when the asylum was open. Includes notes, drawings, and photos that are more spine-chilling than Miss Peregrine.

If you liked how the fantastical elements of Miss Peregrine exist in a teenager’s ordinary life while remaining hidden to the rest of the world, try:

Daughter of Smoke and Bone by Laini Taylor (1st in a series): Karou is an art student in Prague who keeps notebooks full of drawings of creatures that her friends assume are imagined. The creatures, called chimaera, or demons, are real, from the part of Karou’s life that is completely secret from friends and classmates. She runs errands for Brimstone, the demon who raised her, and is able to travel all over the world through the portal in his shop.

If you enjoyed the mystery, historical time period details, and photographs in Miss Peregrine, try:

In the Shadow of Blackbirds by Cat Winters: During the Spanish influenza outbreak and spiritualism movement in 1918 San Diego, Mary Shelley Black is devastated by the death of her childhood friend Stephen in World War I. Upon being struck by lightning, she dies for a few minutes before returning to her body. After that, nothing is the same--she can taste emotions, and, oh yeah, Stephen occasionally appears before her talking about blackbirds, as though he is being tortured. What is he trying to tell her? 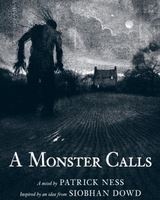 If you enjoyed the visual elements accompanying the story of Miss Peregrine, try:

A Monster Calls by Patrick Ness; illustrated by Jim Kay: A monster in the form of a yew tree visits Conor as his mom battles cancer. Instead of being scared by the monster, Conor is more interested in WHY he is there, always visiting at 12:07 a.m. A short read whose illustrations really enhance the writing, this is definitely more emotional than Miss Peregrine. With themes of losing someone you love and accepting letting go, you will probably be ugly-crying by the end. 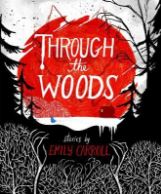 If you could not get enough of the goosebump-inducing photographs in Miss Peregrine, try:

Through the Woods by Emily Carroll: This graphic novel of unsettling tales is accompanied by even creepier artwork.