Spring is one of my favorite times of the year.  While the weather can be all over the place, those mild, warm and sunny spring days are truly a blessing when they occur.  The birds, the bees, the flowers...they all bring me back to carefree childhood days spent playing outdoors. Growing up, The Secret Garden was one of those books that never failed to delight me.  At the beginning of the story, Mary, an only child  who has grown up in India, is orphaned and sent to live on the bleak moors of England, in a forlorn and crumbling mansion, with an uncle she has never met. Although Mary is rightly described as a brat at the beginning of the book, she grows more sympathetic as the story unfolds. The sense of adventure and discovery, of a secret place of one’s own, captivated my imagination as a child and still holds allure for me today.

A few years ago, a friend gave me a CD recording of the Original Broadway Cast Recording of The Secret Garden: A Musical (1991) and it was mind blowing.  I love the depth added to all the relationships. In the song, “If I Had a Fine White Horse” Martha playfully berates Mary’s petulant complaints of boredom.   “A Girl in the Valley” lays out the blossoming romance between Lily and Archibald. Colin, seemingly cut off from his father, sings about a mysterious figure that sometimes comes to his room in a “Round Shouldered Man”.  In “Lily’s Eyes” we hear how the presence of Mary reminds both Archibald and his brother (Dr. Craven) of Lily and it builds a plausible source for the seeds of  Dr. Craven’s animosity toward Colin.  Dickon shines in “Wick”, where he explains to Mary that although things may appear dead on the outside, they can be full of life and vigor on the inside just waiting for the right moment to emerge. One of my favorite songs is the duet between Archibald and the ghost of Lily, “How Could I Ever Know”, where they discuss how to deal with the aftermath of a love lost too soon.  The lyrics in the songs capture so much of the original spirit of the book and add even more depth. I was excited to find a cast recording available on Hoopla. Unfortunately, it is not the Broadway Original Cast recording. There are significantly less tracks (only 21 vs. 36 on the Broadway version) and I don’t like the voices quite as much, but the lyrics are pretty much the same and it is enjoyable nonetheless. And if you like to listen to instrumental music while you read, there are 2 very nice Secret Garden Soundtracks available as well.

The Secret Garden MUSIC on Hoopla

The Secret Garden is a timeless classic of second chances, change and rebirth, love,  heartbreak, forgiveness and acceptance. Since its publication in 1911, it has been reprinted continuously in book format, in abridged retellings, in picture books, audiobooks, plays and movies. In fact, just before the Covid-19 shutdown, I helped a patron place holds on about 6 different movie adaptations, all because there is ANOTHER movie version about to be released, starring Colin Firth, Julie Walters, Dixie Egerickx, Edan Hayhurst, and Amir Wilson. The original date was set for April 3, 2020, but has now been pushed back to August 14th due to the coronavirus covid-19 pandemic.  This is the second time Colin Firth has acted in a film adaptation of The Secret Garden.  The first was released 33 years earlier on Hallmark, and it was one of Firth's earliest films. 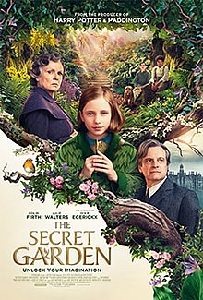 I will eagerly await this new release.  But for now, there are countless e-options available to fill all of your Secret Garden needs. You can find e-book and e-audiobook copies of the Secret Garden via Hoopla, Overdrive and Axis360.  I even found a very strange steampunk film adaptation on Hoopla which features a mechanical garden and flying drones.  The costumes are delightful, but the set design was a bit sparse.  It reminded me of watching old Dr. Who episodes on the BBC while I lived in England during the 1980’s.  The acting wasn’t blockbuster movie level, but it was still oddly satisfying.  Dr. Craven is truly a bad guy of epic proportions in this retelling!  Yikes. 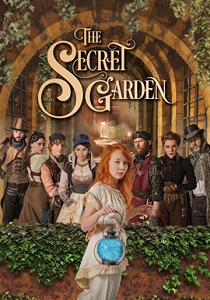